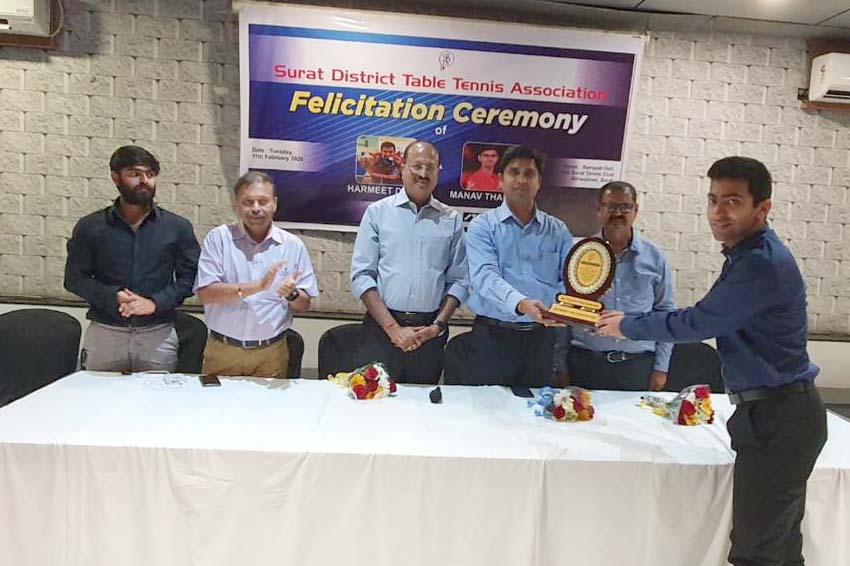 Seasoned campaigner Harmeet defeated city mate Manav in the Men’s final at the 81st National and Inter-State Championships held at Hyderabad to be crowned national champion.

Talking on the occasion, Harmeet recalled his eventful journey of two decades. “I have been playing table tennis for past 21 years. In these two decades TT culture in Surat has undergone a sea change. Nobody took Surat players seriously, not even in state tournaments. But today, two Surtis played final in the national tournament,” said Harmeet.

Recalling golden moments of his career, the 26-year old paddler also mentioned about gift he received from Surat District Table Tennis Association. “In 2005 when I won a state ranking tournament, SDTTA gifted me TT table. It was very special. I thank SDTTA and GSTTA for their constant support throughout this wonderful journey,” said Harmeet.

The newly crowned national champion Harmeet termed Gujarat’s TT future as bright.  “Manav, Manush Shah and Ishaan Hingorani are surely going to excel and Gujarat paddlers and team are no pushovers anymore. Gujarat is among the forces to reckon with,” he remarked.

Known for encouraging sports activities, Mr Pani praised Harmeet for his remarkable achievements. “During my IAS training period, I came across lot of table tennis players across India, but Gujarat. But Harmeet and Manav’s final has put Gujarat on the national map. Harmeet is going to be inspiration to many. This is big achievement of GSTTA,” said Pani.

Pani has been known to extend his hand for promoting sports. While posted as Sabarkantha District collector, Mr Pani had encouraged Tour De Polo cycle race held through the hilly Polo forest as part of Republic Day Celebrations.

Manav’s parents – Dr Vikas and Kalpana – received the award on his behalf as the paddler is away on national duty competing in Portugal.

SDTTA president Mr Pramod Chaudhary, who has been instrumental in transforming Table Tennis culture in Surat hailed Harmeet and Manav. “It is proud moment for all Surtis. Harmeet has set a trend. Soon we are going to have a residential academy here in Surat and I am confident, this diamond city will produce more national champions who will idolize Harmeet,” said Chaudhary.

Introducing the Samsung Galaxy S20: Change the Way You Experience the World