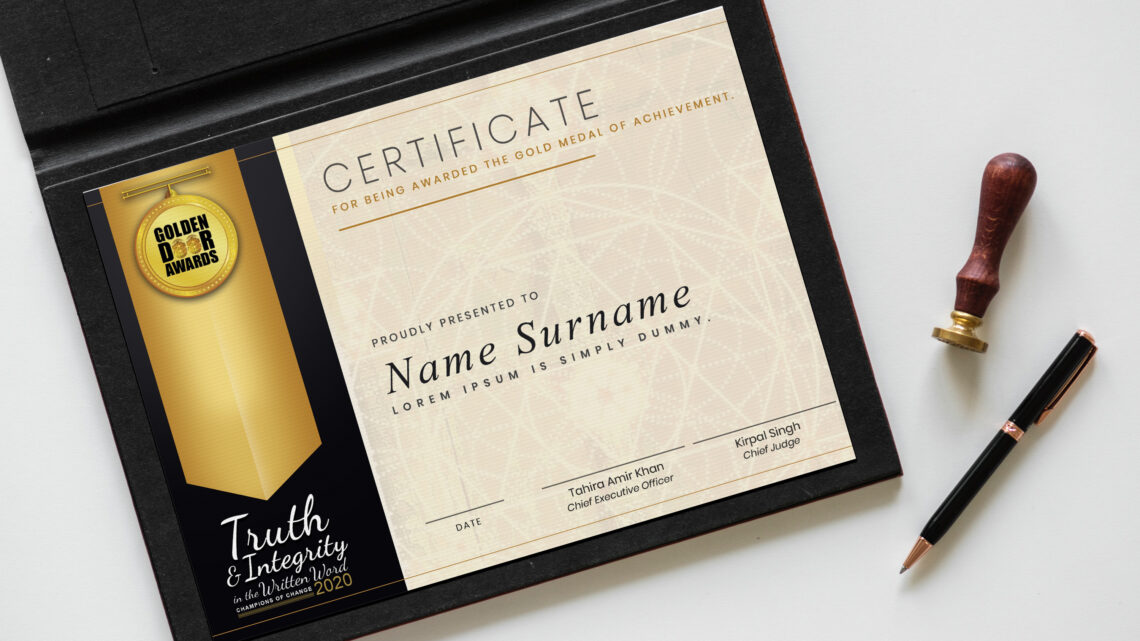 The new decade 2020 is all set to welcome winners from across the globe for the ‘Golden Door’, World’s first International Writer’s Awards for truth and Integrity of digital content and printed literature. Symbolic as the ‘Golden Door of Truth’, this award aims to recognise non-fiction writers as agents of truth and integrity. First endorsed by Singapore Ambassador-at-large Professor Tommy Koh, the awards will be inaugurated in Singapore on Saturday 5th September 2020 at the iconic Marina Bay Sands Convention Centre. It will be attended by World leaders, Change-makers and Truth-tellers from more than 20 countries.

The management committee consist of the Founder of Golden Door, a veteran Technologist, Tahira Amir Sultan Khan, Chair of the Judging Panel and Singapore’s Literary and Cultural Critic, Dr. Kirpal Singh and Human Advocate and CEO of Krescendo Communications, Ganesh Somwanshi. The Judging Panel comprise of a distinguished group of internationally acclaimed writers, speakers and academia from USA, India and Australia. Some level of the evaluation will be supported by AI for the integrity of content.

There are 3 categories : the Golden Door Non-Fiction Book Award, Golden Door Non-Fiction Essay Award (Blogs included) and Golden Door Poetry Award. There will also be 2 veterans who will receive the ‘Golden Door Lifetime Achievement Award’. From change champions, bestselling authors, business leaders, UN ambassadors, human rights commissioners as well as prodigies, bloggers, renown film-makers, the hall will be filled with movers and shakers of great diversity either to witness or to contend for the awards.

Tahira Amir Khan, Founder, The Golden Door opined, “We have received a positive response
for the concept from across the World and I hope that the awards will create a cascading effect for truth tellers. This initiative aims to encourage writers of all kinds, be it book authors, bloggers and even vloggers to write honestly, and from there to transform these truth-inspired written works into real-world ventures. I chose Singapore to be the launchpad as it is one of the ‘meeting points’ for the world. The next phase I envision for Singapore is to be the world beacon for Truth. But more than that, to bring the ‘Golden Door Awards’ concept to every major city from the UK to India, and beyond.”

Dr. Kirpal Singh, Chair of the Judging Panel added, “The golden truth has been pursued from time immemorial. From ancient Greece and Rome to ancient China and India, sage after sage has sought and shared his (mainly his though there is the occasional female voice as well) insight/vision of what may be labelled as GOLDEN TRUTH. The GOLDEN DOOR AWARDS cherish and honor the Truth-seekers and those whose own life journeys have taken them deep into reflecting on this profound theme/topic.”

For free tickets do not forget to visit the website https://www.goldendoorawards.org.