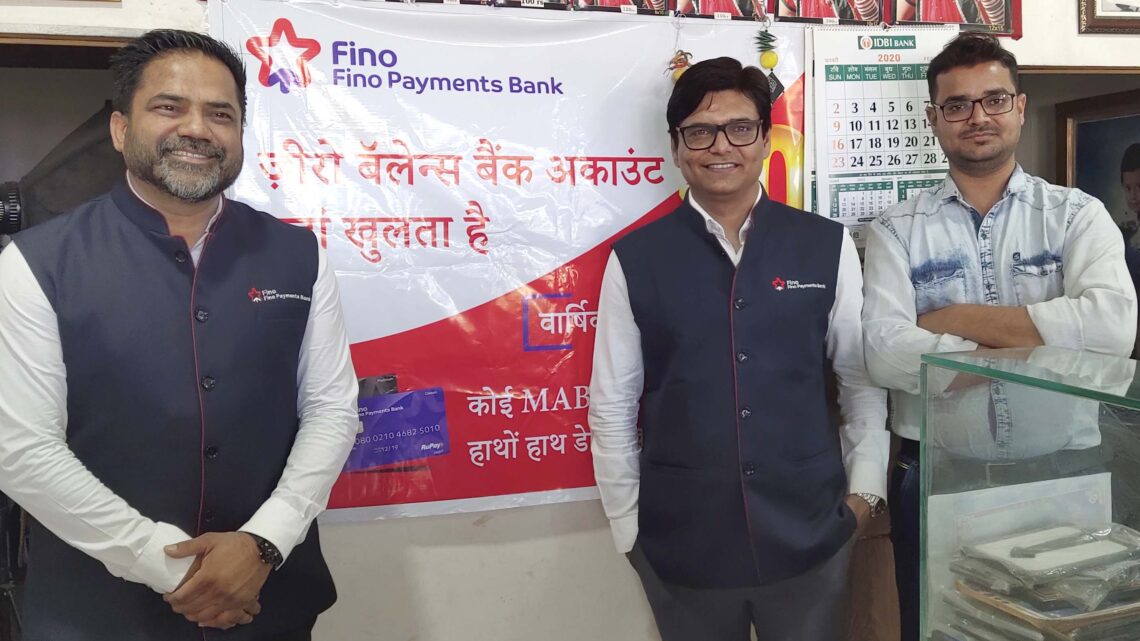 As a Fino Bank point, this photo studio brings simple and convenient banking closer to customers

Surat: Vijay Katariya runs a photo studio at Palsana Char Rasta, near Surat. The studio is one of the most sought after by the people in the locality as it doubles up as a banking point of Fino Payments Bank.  Here customers can open bank account, deposit and withdraw cash as well as do money transfer transactions. They can also pay utility bills, recharge mobile and DTH.

Vijay Katariya is one of the over 1200 Fino Payments Bank merchant points in Surat and part of the close to 10,000 strong and growing banking points of Fino in Gujarat. This network also includes over 520 outlets of Fino’s strategic partner Bharat Petroleum (BPCL) spread across the state.

In line with its Gully Gully Fino approach, Fino intends to have a merchant point in each street of Surat to improve banking access.

Addressing media on the bank’s plan in and around Surat and the state, Mr. Himanshu Mishra, Senior Divisional Head (Central and West), Fino Payments Bank said, “We have initiated Gully Gully Fino approach to penetrate deeper into the towns and villages, including Rajkot, Ahmedabad, Surat, Bharuch, Mehsana, Vadodara and other places to enhance banking access. Through this initiative we plan to double our network in Surat as well as in Gujarat by March 2021.”

“Our objective is to make banking simple and convenient. Therefore we are looking at neighbourhood shops as banking points. Outlets such as Vijay’s photo studio are ‘one stop shop for all banking needs’ that remove some of the biggest pain areas for customers. There is no need to fill any form to deposit, withdraw or transfer money and no need to stand in a queue for long hours. Further a simple Aadhaar authentication by the customer is enough to complete the transaction. Adding to it, cash is always available at these shops unlike at some ATMs,” added Mr. Mishra

Stating his experience, Vijay Katariya says, “I am associated with Fino since 2012. Initially as a remittance point and later as Fino Payments Bank merchant point. The thought of being a banker to my customers as well as the potential to increase my income, motivated me to become a Fino banking point. Customers who come for photographs also avail banking services leading to increase in footfalls and income. As my shop is open for long hours, even on holidays and Sundays, customers feel convenience.”

It is for these reasons that merchants like Vijay across Surat and Gujarat are popular in their localities as mini bank and ATM. For a simple small business owner to be referred as a banker is a matter of great respect.