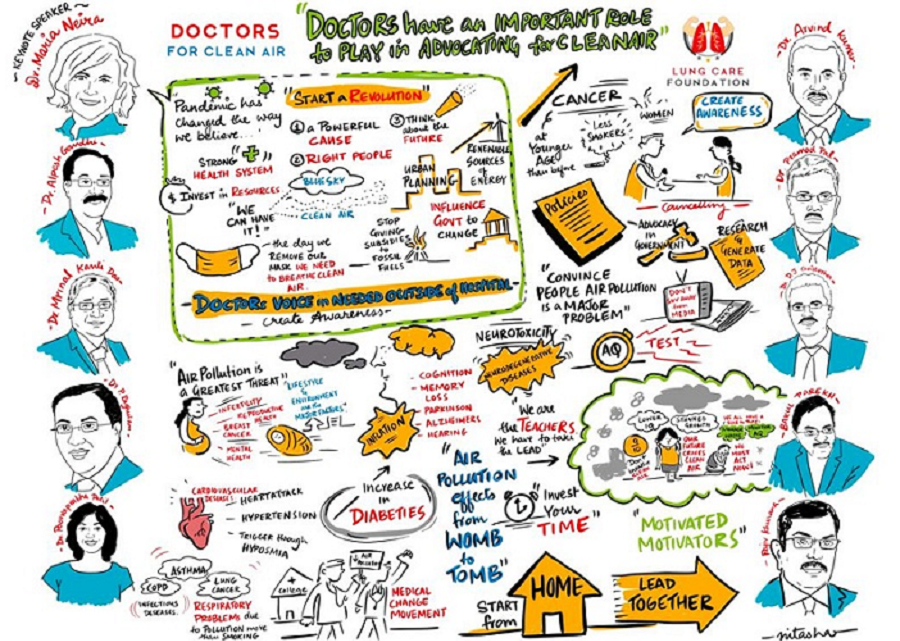 Doctors For Clean Air Conclave was held wherein, over 2000 Doctors Said that Air Pollution is hazardous to health and requested Governments to Prioritize Health of Citizens by Ensuring Clean Air as We Recover From COVID-19 .

New Delhi, India: Doctors for Clean Air, a pan-India network of doctors advocating for clean air, held a first of its kind full-day Conclave by doctors and for doctors on Air Pollution on the occasion of the first “International Day of Clean Air for Blue Skies.” The virtual event was organized jointly by seven national medical associations, which recognize the importance of clean air for human health and represent over 130,000 Doctors: Federation of Obstetric & Gynaecological Society of India (FOGSI), Indian Academy of Paediatrics (IAP), Indian Chest Society (ICS), Cardiological Society of India (CSI), Indian Academy of Neurology (IAN) supported by Association of Surgeons of India (ASI) and Medical Students Association of India (MSAI). In the conclave, Doctors discussed “Health Impacts of Air Pollution on Pregnant Woman & New Born, Children, Heart, Lungs, and Brain. The conclave also discussed the role of doctors in advocating for cleanair.”

In a survey among the 2000 registrants for the conclave, 99.5% respondents said Air Pollution is hazardous to our health. 96.9% respondents said that the Government should prioritize the health of the citizens by ensuring clean air for all as we recover from COVID-19.

During the conclave, Dr. Maria Neira, Director, Public Health, Environment and Social Determinants of Health Department (PHE), World Health Organization, said: “As a health professional, I have seen first hand what air pollution does to our bodies, to our lungs, and to our brains. Polluted air, largely caused by the burning of fossil fuels, affects almost all major organs in our bodies. It is responsible for the premature death of over 1 million Indians every year, and brings huge healthcare costs to Indian families and the economy. Health professionals have a duty of care, and they take up a trusted position in society. That is why I’m so excited to see Doctors for Clean Air grow so fast, to over 200,000 doctors across the country, adding thousands of trusted voices to our race for a cleaner and healthier India.”

Dr. Bakul Parekh, President, Indian Academy of Pediatrics (IAP) in his address has said that “Air pollution leading to lower IQ, stunted growth, lower physical growth, increased obesity. Heath professionals must come together to address air pollution as a priority for collective concerted action. For the millions of children exposed to breathing polluted air there is little time to waste and so much to gain from CleanAir.”

Presidents of 7 specialty national medical associations, representing over 130,000 Doctors, shared research linking air pollution and health and asked fellow medical professionals to take the lead to advocate for clean air and ask citizens and policymakers to ensure Clean Air for All for a healthy and productiveIndia.

Air Pollution causes over 7 million premature deaths across the world, with 1.2 million people in India alone. Long term exposure to indoor and ambient (outdoor) air pollution in the country is found to be linked to nearly 5 million deaths from non-communicable diseases like stroke, diabetes, heart attack, lung cancer, chronic lung diseases. (State of Global Air 2019 published by Health Effects Institute). Recent research evidence from across the world also suggests a strong link between air pollution and COVID-19 communicable disease. A study conducted by Harvard University in the United States1 highlighted that every one µg/m3 increase in PM2.5 isassociatedwithan8%increaseintheCOVID-19deathrate.Peoplelivinginpollutedareas are found more vulnerable to SARS-CoV-2 infection. A strong correlation2 was observed between the increased concentration of PM2.5, Carbon monoxide (CO), Nitrogen dioxide (NO2) & higher mortality rates in Italy & theUS.

Quotes of the Presidents of National Medical Associations:

“Air pollution can’t be eliminated completely but we can protect ourselves. Air pollution is somethingwecanlearnabout.Lifestyleandenvironmentplayasignificantroleinpregnancy”

“Airpollutioncausingclimatechangehasnothadtheexpectedimpactonmankind,changing the narrative to its impact on health could be the gamechanger!”

“Air Pollution increases the higher chances of having many neurological disorders especially neurodegenerative disorders such as Parkinson’s disease, Alzheimers disease and other dementias. It also increases atherosclerosis, stroke, depression in elderly and neurodevelopment aldisorders in children. We need to reduce air pollution through increasing awareness among people and regulatory agencies. Thus, will give us a brighter and healthy future.”

“As a young healthcare professional, I firmly believe that our responsibility lies beyond treating ailments and encompasses ensuring good health of our communities and preventing diseases- and access to clean air is central to that. The health sector has a key role to play in leading the movement not only by motivating and mobilizing masses to take action, but also by propelling systemic changes in legislation and driving social accountability for’ clean air for good health’.”

“Air Pollution not only has long-term health impacts on us but also makes people living in the polluted city more vulnerable to infectious diseases such as COVID-19 by reducing their immunity and damaging their organs. We must focus on having clean air for the health and wellbeing of our citizens and futuregenerations.”

About Doctors For Clean Air:

“Doctors for Clean Air” (DFCA), an initiative by Lung Care Foundation and Health Care Without Harm, is a network of identified, passionate and informed Doctors who are leading the fight against Air Pollution in their respective regions across India. To know more about