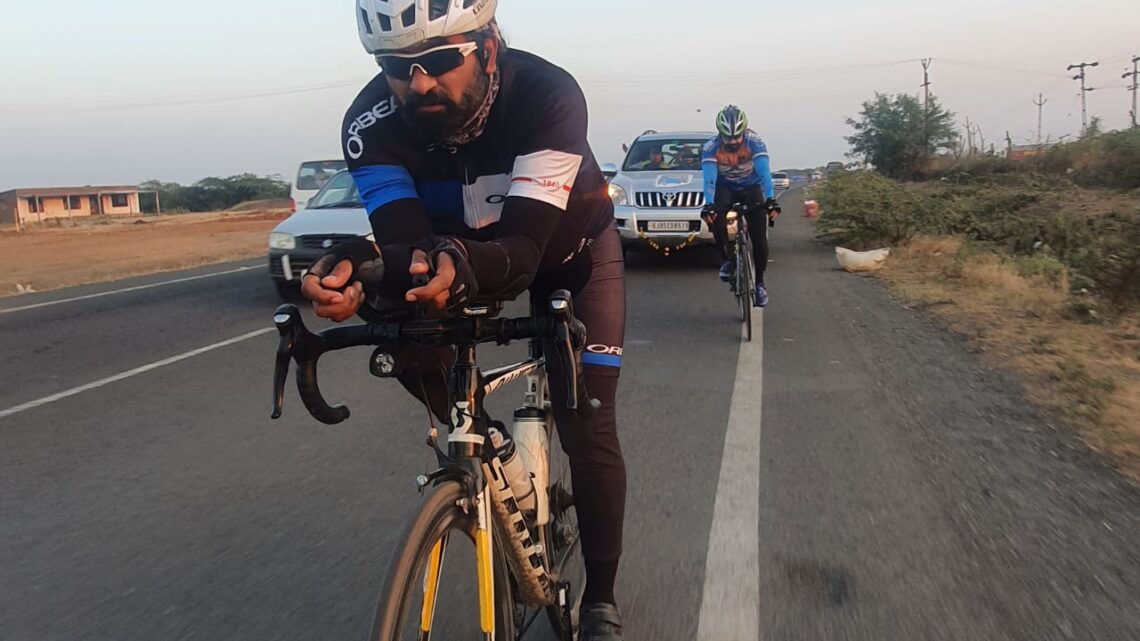 Ride for Gujarat Pride:  Jagdish Italiya along with Dr Dharmesh Balar completed  1600 kms  Cycling in 5 days all around Gujarat

While we were busy celebrating Diwali, one Surti named Jagdish Italiya toured Gujarat on a bicycle.

Surat, Gujarat [India] : Diwali is the biggest and most celebrated festival of Hindus and New Year is very important festival for Gujaratis. While most of us were engrossed in Diwali celebrations,  a well-known Surti by the name Jagdish Italiya rode day and night through Gujarat on a bicycle. The bicycle tour was organized with the aim of enhancing the pride of Gujarat and promoting cycling in Gujarati community. Jagdish Italiya successfully completed the cycling tour of 1600 kms which is called Ultra Cycling Tour in the world of cycling. After successful completion of the tour, Jagdish Italiya’s first reaction was that once a Gujarati makes up his mind about something, than nothing can be impossible for him. Jagdish appreciates the immense support provided by Dr. Dharmesh Balar, his cycling companion who stood like a rock with him during the entire cycle tour.  He further added that a cyclist’s job is to keep cycling for 20-21 hours a day while his support crew members line up all the other things like route, rest, stretching, food intake etc.

Our forefathers used to say that the harder the journey, the more fruitful is the outcome. Another saying goes that in order to achieve something, we have to sacrifice something. Both Jagdish Italiya and Dr. Dharmesh Balar proved these sayings with their Ultra Cycling Tour. In the festival of Diwali, when you get a break from your professional life and wish to enjoy moments of leisure with your loved ones, it takes courage to make good use of this time for social cause. Indeed Jagdish Italiya and Dr. Dharmesh Baler have shown tremendous courage to sacrifice their Diwali break and go on a cycling tour.

Jagdish Italiya started Garvi Gujarat Cycle Tour with his friend Dr. Dharmesh Balar from his residence at Piplod in Surat at 9.30 pm on November 12 on the auspicious occasion of Dhanteras. Their cycling tour route was from Surat to Bhavnagar and from Bhavnagar to the entire coastal region of Saurashtra, Diu, Somnath, Porbandar, Dwarka, Jamnagar, Rajkot and again from there to Surat. This was a very challenging tour because 20 to 21 hours out of 24 hours were spent in cycling, without caring about day or night. The mere thought of so many hours of cycling would give goosebumps to anyone, yet Jagdish Italiya was adamant that he would complete the Garvi Gujarat cycle tour in 5 days at any cost. After completing their mission of cycling 1600 running kms in 5 days, Jagdish Italiya along with his cycling partner Dr. Dharmesh Balar returned successfully at 6.30 pm on November 17 and were given a warm welcome by their friends and families.

In a media briefing after returning to Surat, Jagdish Italiya said that ‘in the Garvi Gujarat Cycling Tour, we completed an average of 300-350 running kms per day. This was a kind of Supportive Cycling Tour, wherein 2 crews with 3 members in each supported us during our entire cycling journey. The crew members played different roles in the 12-12 hour shifts. The two crew also worked to provide protection against the movement of other vehicles by staying behind us on the highway at night and also looked after our water and food provision during the journey.’

Bhavnagar, which was the most difficult route, extended the tour by one day.

When asked which was the hardest part during cycling, Jagdish Italiya said that the real problem was when he approached Bhavnagar. The bicycles they had were kind of a road bike which could run properly only on the good quality roads. Due to the poor condition of the roads from Bhavnagar to Mahuva, Talaja, Rajula we had to face a lot of problems while cycling in these areas, especially at night. So our plan to complete it in four days got delayed by a day and finally we completed the Garvi Gujarat Tour in five days.

They had a thrilling time while cycling through the Gir Jungle.

Jagdish Italiya said he was passing through some parts of the Gir forest on the Diu-Somnath route from Rajula at night. Every 300 meters they encountered a board stating that they were passing through the territory of the lions. They even spotted foxes and snakes on this route from Gir. Crossing a jungle like Gir at midnight on cycle sure gave them a very hair-raising experience, one which they will cherish forever.

There was a tremendous response from music lovers also along the way.

Jagdish Italiya himself is a good singer, and he has recently launched a Gujarati bhajan album called Ram Sabha. That’s why many music lovers in his circle came forward to greet him throughout the cycling route. He was overwhelmed by the surprise visit from Hardik Dave and world famous Gujarati singer Praful Dave who came to meet them in Madhavpur, just before Porbandar. Many local cycling groups also cycled together at different places in Porbandar, Jamnagar and Rajkot and inspired and motivated them during the tour.

They are grateful to everyone for their love and support throughout the cycle ride and after the ride. They are amazed by the wonderful hospitality from the people in Gujarat and hope they can inspire many others in the state to do cycling.