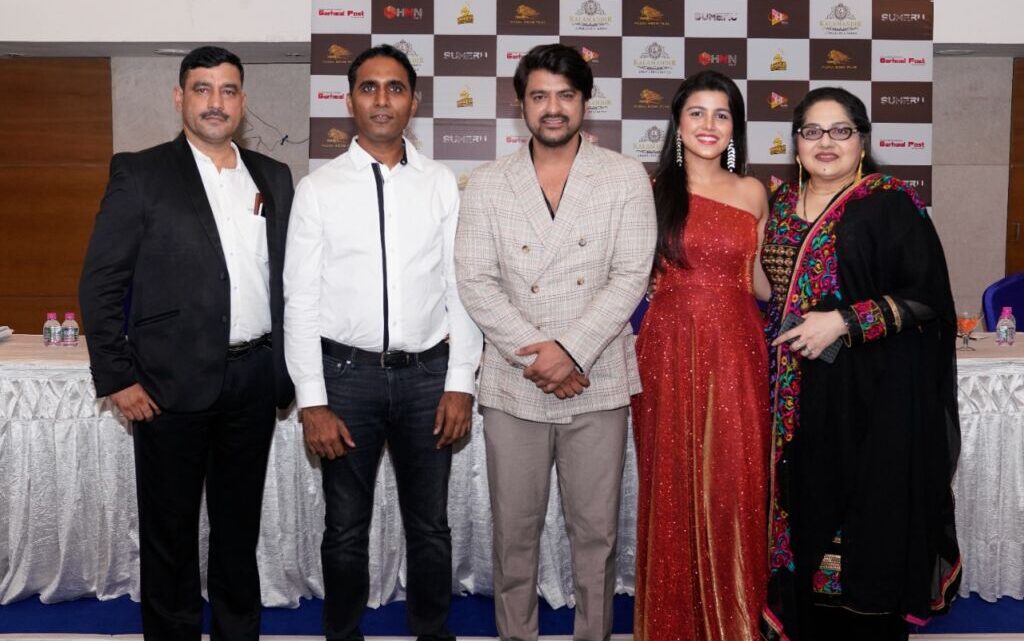 Sumeru is a Hindi romantic film directed by Avinash Dhyani, the film revolves around two characters Bhanvar and Savi. Bhanvar is a young lad who has left everything in search of his father who died in an avalanche. Savi on the other hand is from an aristocratic family and came to Harsil for her destination wedding with her fiancé where she goes astray and meets Bhanvar accidentally. The journey further continues and they fulfils their purposes and eventually fall in love.
Producer, Director and protagonist Avinash Dhyani says, “We are excited about the brand partnership of the film Sumeru with Kalamandir Jewellers Limited. The film is a pure romantic love story shot on a mountainous backdrop.

On this occasion, Milan Shah, director of Kalamandir Jewellers Limited said that “In the film Sumeru, audience will get to witness Avinash and Sanskriti as a fresh couple. Kalamandir Jewellers Limited will the brand partner of the film and will be involved in the promotion of the film through TV, Radio, and Print and Online media. We will be associated with the film as the brand partner to share the tradition of our brand to the young audience. Kalamandir Jewellers Limited, Gujarat’s leading jewellery brand is well-known for bringing local flavoured jewellery to the customers. The business is run by Shah Family, actively engaged in this line of business for about 4 decades. Company is having its Jewellery & ornaments showroom at four locations viz. Kosamba, Bharuch, Surat & Vapi in Gujarat. The company has also introduced some of the leading jewellery brands in India: Rishta, Kingly, Indo Italian, Rainbow, Platinum, Ruby & Rishta Bandhan managed and operated by Kalamandir Jewellers Ltd.

Produced under the banner of Padma Siddhi Films, “Sumeru” is written and directed by Avinash Dhyani. Avinash Dhyani and Sanskriti Bhatt are in the leads. Along with them Shagufta Ali, Suruchi Saklani, Abhishek Maindola, Prashil Rawat, Satish Sharma, Jeet Maila Gurung, Arvind Panwar and Madhavendra Singh Rawat will be seen in important roles. The film is produced by Ravinder Bhatt and Avinash Dhyani. The cinematographer of the film is Harish Negi. The romantic music of the film is composed by Sunjoy Bose. The film Sumeru has been shot at beautiful locations of Uttrakhand like Dehradun, Harsil, Mussoorie, and Dhanaulti. The film Sumeru will be released in cinemas across the country on 1 October 2021.