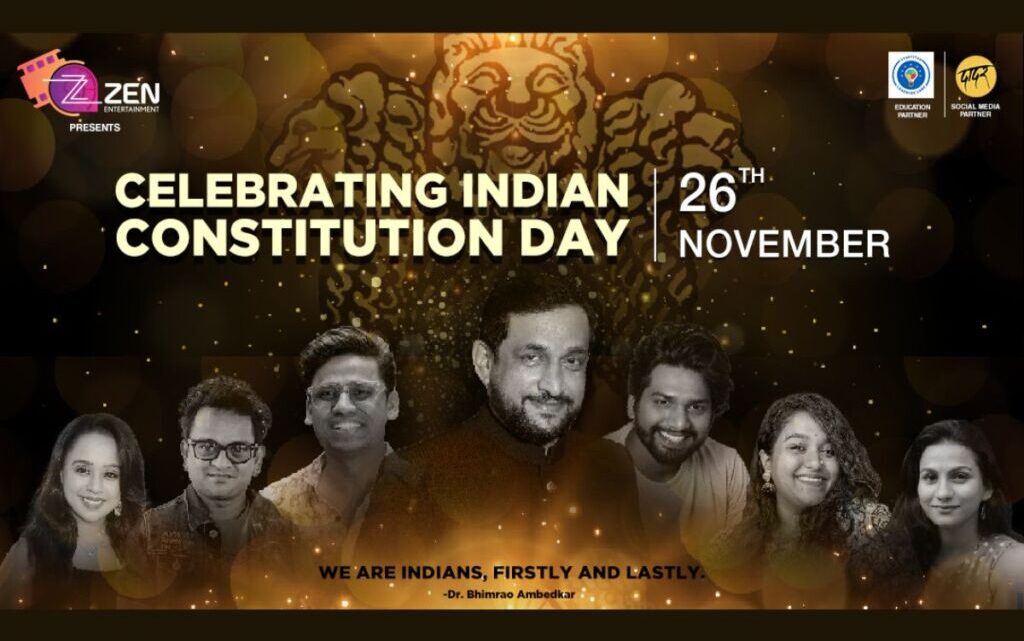 To take vigilance of the democracy bestowed upon us by the constitution means to respect the constitutions. Remembering Dr Babasaheb Ambedkar’s quote “We are Indians, firstly and lastly,” we must celebrate the day throughout the nation for the “Constitution of India ” that truly unites us as Indians. With this aim, a small attempt has been made by Zen Entertainment to pay homage to the Constitution by celebrating Indian Constitution Day through a PSA (Public Service Announcement) video. The video starrs, Maharashtrachi Hasya Jatra fame actors Pruthvik Pratap, Rohit Mane, Vanita Kharat and Chala Hawa Yeu Dya fame actor Ankur Wadhave along with Sumedha Desai, Dipali Jadhav, Nikhil Latagjanan, Mayura Saavi. Also, a well known and much appreciated film television and theater actor Prasad Oak, who is currently a Judge of Maharashtrachi Hasya Jatra has played in the video PSA (public service announcement).

After the recent successful musical event, Swarangan presented by Zee Yuva, this PSA is the first video production under Zen Entertainment. This video aims to motivate people to celebrate the national Integration within Indians on the occasion of Constitution Day and attempts have been made to deliver it to homes through social media.The 1:20 minute video is directed by Mayur Dhamapurkar, who has previously directed short films like Midnight story, Mogra which got acknowledgement with several awards including Best film in Goa film festival. While the concept is coined by Mayura Saavi, cinematography and editing by Shalin Ghag, music by Abhijeet Hegde Patil, and costumes by Aditi Ranadive. Zen entertainment collaborated with Vyaktitva Learning Labs, a non profit organization working on education through media literacy as education partner.

Producer Ashwini Kamble has been working in the Marathi theater and television industry for the last eight years. With Zen Entertainment, she aims to produce music, drama, series, and movies with pan subjects in the sphere of entertainment. Additionally, by addressing social concerns alongside, she aspires to bring in a new wave in the Marathi Entertainment Industry.

Here’s the link to the PSA “INDIAN CONSTITUTION DAY”

Also, for further details regarding other upcoming shows of Zen Entertainment, you can visit and follow ZEN ENTERTAINMENT’S official Instagram page.